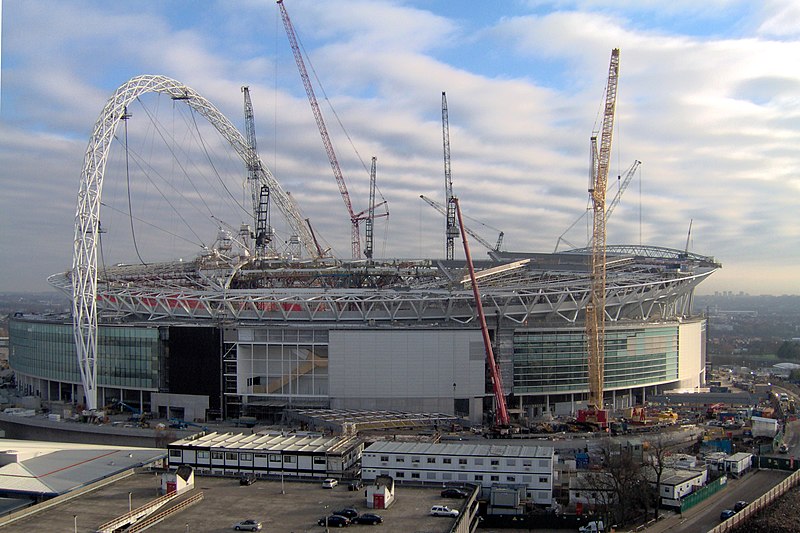 Wembley was designed by architects HOK Sport and Foster and Partners with engineers Mott MacDonald, built by Multiplex and funded by Sport England, WNSL (Wembley National Stadium Limited), the Football Association, the Department for Culture Media and Sport and the London Development Agency. It is the most expensive stadium ever built at a cost of £798 million and has the largest roof-covered seating capacity in the world.

The all seater stadium is based around a bowl design with a capacity of 90,000, protected from the elements by a sliding roof that does not completely enclose it. It can also be adapted as an athletic stadium by erecting a temporary platform over the lowest tier of seating. The stadium’s signature feature is a circular section lattice arch of 7 m (23 ft) internal diameter with a 315 m (1,033 ft) span, erected some 22° off true, and rising to 140 m (459 ft) tall. It supports all the weight of the north roof and 60% of the weight of the retractable roof on the southern side. The archway is the world’s longest unsupported roof structure.
The start up phase of the project was complex because of the multiple sources of funding (see above) and the differing requirements of the stakeholders. The FA had a strong preference for a pure football stadium while Sport England wished to see a multi-purpose sports arena. The confusion over scope delayed the approval of funding and a marginal business case was only just approved on the day the demolitions started. In the end the “platform system” was conceived to convert the stadium for athletics use, but its use would decrease the stadium’s capacity to approximately 60,000. No athletics events have taken place at the stadium, and none are scheduled.
The initial plan for the reconstruction of Wembley was for demolition to begin before Christmas 2000, and for the new stadium to be completed sometime during 2003, but this work was delayed by a succession of financial and legal difficulties. It was scheduled to open on 13 May 2006, with the first game being that year’s FA Cup Final. However, worries were expressed as to whether the stadium would actually be completed on time. The new stadium was completed and handed over to the FA on 9 March 2007, with the total cost of the project (including local transport infrastructure redevelopment and the cost of financing) estimated to be £1 billion.
In October 2005, Sports Minister Richard Caborn announced: “They say the Cup Final will be there, barring six feet of snow or something like that”. However in December 2005, the builders admitted that there was a “material risk” that the stadium might not be ready in time for the Cup Final and in February 2006, these worries were confirmed by the FA who moved the game to Cardiff’s Millennium Stadium.
The delays started from the very start. The procurement process to contractor followed a twin track approach. Multiplex, who ultimately won the contract, were given preferential treatment from the start. An enquire by David James (the well know company doctor) concluded that the procurement process “while showing no evidence of corruption was unlikely to satisfy best practice standards” and “lacked a level playing field”. In December 2003, the constructors of the arch, subcontractors Cleveland Bridge, warned Multiplex about rising costs and a delay on the steel job of almost a year due to design changes which Multiplex rejected. Cleveland Bridge were removed from the project and replaced by Dutch firm Hollandia with all the attendant problems of starting over. On 20 March 2006, a steel rafter in the roof of the new development fell by a foot and a half, forcing 3,000 workers to evacuate the stadium and raising further doubts over the completion date which was already behind schedule. On 23 March 2006, sewers beneath the stadium buckled due to ground movement. The General, Municipal and Boliermakers Union leader Steve Kelly said that the problem had been caused by the pipes not being properly laid, and that the repair would take months. A spokesman for developers Multiplex said that they did not believe this would “have any impact on the completion of the stadium”, which was then scheduled to be completed on 31 March 2006.
On 30 March 2006, the developers announced the stadium would not be ready until 2007. All competitions and concerts planned were to be moved to suitable locations. On 19 June 2006 it was announced that the turf had been laid and on 19 October 2006 that the venue was now set to open in early 2007. WNSL, a subsidiary of The Football Association, is expected to pay around £36m to Multiplex, as well as the amount of the original fixed-price contract. This meant that Wembley Stadium was ready for the 2007 FA Cup Final on 19 May that year. The official Wembley Stadium website announced that the stadium would be open for public viewing for local residents of Brent on 3 March 2007, however the event was delayed by two weeks and instead happened on 17 March. The keys to the new Wembley stadium were finally handed over to the owners on 9 March 2007 ready to be open and used for upcoming FA Cup football matches, concerts and other events.